I met Mr. and Mrs. Loew through a custom home builder in Greeley, Colorado. The builder had provided the Loews with a landscape design and he asked Southern Exposure Landscape Management, Inc. to bid the project. After presenting the Loews with a proposal, it was apparent that their goals and objectives were not met with the original builder-provided design.

The Loews' new home is rustic but elegant and they wanted their landscape to reflect that as well. They also use the outdoors extensively for political fund raising, the Greeley Stampede gatherings and other social engagements. They wanted to create a place they could entertain both day and night through all four seasons that was private, colorful and interesting year-round.

In order to achieve this goal, Southern Exposure redesigned the project to include a large outdoor patio with gas fire pit using Colorado buff sandstone and natural boulder seating. We also joined and overlayed an existing screened concrete patio with Colorado buff sandstone for a seamless transition. Both areas are used to enjoy open air dining, relaxing, and entertaining.

Because the yard was flat, we imported 150 cubic yards of soil and 20 tons of moss rock boulders to create a berm and planted it with 12- to 15-foot Conifers to create privacy. We then built an inviting slab sandstone and boulder stair system for an elegant entry. For interest and color, we mass planted ornamental grasses and shrub roses. We completed the berm planting with low-growing evergreens, native deciduous and xeric shrubs and perennials.

Southern Exposure also added other details to make the landscape unique and intimate. We designed the gas firepit using vertical buff strip stone of varying lengths to match the lentils on the home’s windows. The risers for the exterior front entry stairs were cut in a geometric shape to accent the southwest/rustic feel on the interior. Also, we added one large scale water feature by the front entry to greet guests and a second small scale water feature near the master bedroom and sitting porch for the soothing ambient sound of flowing water. So the Loews could enjoy all this at night as well as to provide added security, we installed a low-voltage lighting package. The final result – Beautiful! 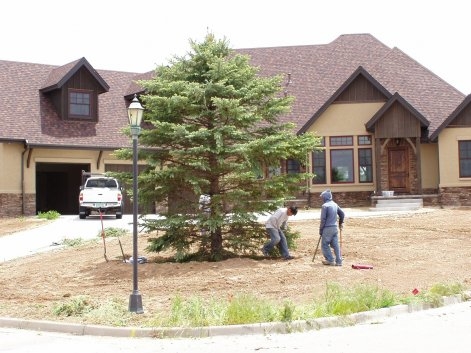 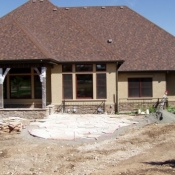 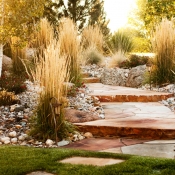 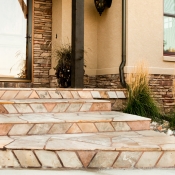 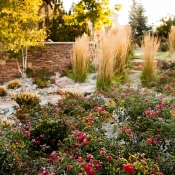 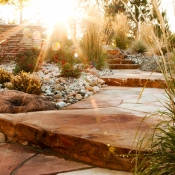 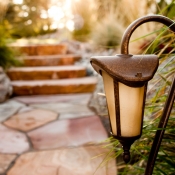 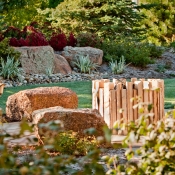 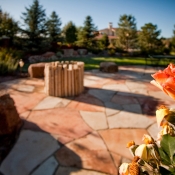 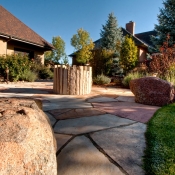 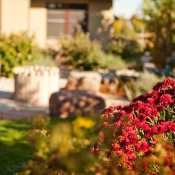 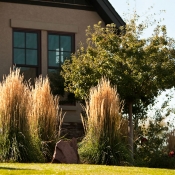 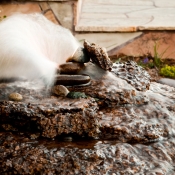 After reviewing numerous competing landscape designs and the costs for them we selected Southern Exposure. We asked for and received a design that would complement our architecture, be maintenance and water efficient. We also requested a design to accommodate the entertaining which we do. Additionally, we have a preference for a pine tree or mountain look which would enhance the privacy of the home as it backs on to several houses. The was achieved by the creation of a berm with many trees and compatible shrubs.

We also asked for and received seasonal color on the property. We had visited Thomas Jefferson's home and were impressed that he had designed a garden to ensure four seasons of growth and visually appealing views. This was achieved through the use of year round fountains that provide a beautiful winter setting when the flowering season ends.

Southern Exposure also installed a patio and BBQ area that has functioned for in excess of 150 guests. The rock work is rugged and reflects workmanship that far exceeds any of the competitors. It never fails to draw comments and requests for information regarding Southern Exposure. The area was also designed with an impressive back entrance so as to permit us to entertain without going through the house. This has proved invaluable in maintenance and preserving the property.

During the installation process, Southern Exposure employees were courteous and timely in their tasks. Communication and responsiveness of the Company was terrific. It was, in short, a fun process. Normally, we look with dread on hiring contractors, working with the managers and employees of Southern Exposure was a welcomed exception. The Company is quick to respond to problems and make any changes or improvements that are warranted. The Company stands by its product. I cannot recommend them highly enough and would happily work with them in the future.