The Front Range landscape project began with the half acre, weed covered lot surrounding The Code's newly constructed home and a set of landscape plans from their architect. 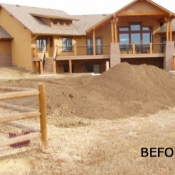 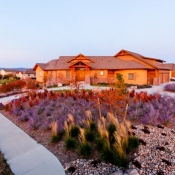 "I had two landscape companies bid the job.  The first company said the architect's plant selection and sprinkler design were dubious, but they bid the plans as presented.  When I met with Southern Exposure (Dan), he too expressed concerns about the viability of the architect's plans.  Rather than bid the architect's design, Dan offered to redesign the project incorporating my original concepts but including plants and irrigation systems more appropriate to Northern Colorado's arid climate.  When Dan presented an impressive set of new plans at our next meeting (which he drafted before he had any commitment from me), I knew I found my new landscaper.

As the design took shape, I asked for numerous changes which Southern Exposure accommodated.  When Dan and I visited tree farms and nurseries so I could personally select plants, we sometimes found varieties neither of us had considered using. When I decided to use different plants, Dan changed the plans to include the new discoveries. As work progressed, the design continually evolved and improved.

No project is without challenges.  My home owner's association requested I change some of the newly installed plantings and hardscape.  Dan represented me at the landscape review meeting and did the required changes at reduced rates so we could stay on budget.

In conclusion, I consider myself fortunate to have selected Southern Exposure for this project  They finished on schedule, my wife and I are pleased that the landscaping complements our home, and we look forward to watching the landscape mature in the years ahead.”